Astaroth is a beautiful slender woman with hip-length black hair and wears a skimpy outfit. She usually has an ice visage.

Despite being an executive of the Kisaragi Corporation, she and her co-worker Belial have shown to act inept and immature when dealing with Combat Agent six.

Astaroth is one of the three generals in the evil organization, the Kisaragi Corporation. She and her co-worker, Belial, assigned Combat Agent Six to a reconnaissance mission to an alternate world. A high-performance android named Alice is assigned to join him on his mission by her as well.

Combat Agent Six: She was the one who recruited him to the organization. Astaroth considers him one of the most trustworthy members of the organization. She apparently has a crush on him and cares about his well-being, even wanting to go on his place to the other world when he was chosen for this mission, but gets violent or flustered by his lewd attempts to get close to her.

Belial of Fire: One of the founders of the organization and a friend of hers. She is teased by her for her crush on Six.

Black Lilith: One of the founders of the organization. Astaroth picked on her for refusing to wear the general uniform and for using the same color as her (white). 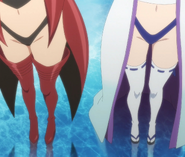 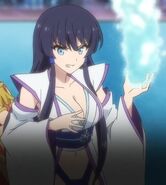 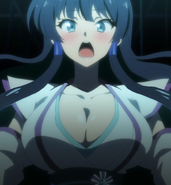 Retrieved from "https://sentouin-hakenshimasu.fandom.com/wiki/Astaroth?oldid=1839"
Community content is available under CC-BY-SA unless otherwise noted.