Grimm is slender woman looks to be about 18-19 years old. She has sleepy brown eyes on a faintly pale face framed with beautiful straight red hair. She gives the impression of being a very frail person.

Grimm is usually in a wheelchair barefoot. She wears a long skirt and black G-string panties.

Although Grimm's occupation is a arch-priest, she is the worshiper of what's alluded to be an evil god. However, she doesn't accepting any insinuation that her goddess is an Evil God.

Grimm's also known to be quite flirtatious, but gets easily flustered when put into lewd situations. Being desperate to get married, and is always jealous of everyone in a romantic relationship or women more attractive than her, to the point of curse those people.

Grimm is also known to become languid when exposed to the sun, making her deeply tired in the process, sleeping all day long.

Grimm was one of the two chosen people to be recruited for the newly established Commando Team of the Grace Kingdom, as she had a killer count bigger than her comrades. Initially, she comes off as flirtatious with Combat Agent Six, who does a lewd act to her making Grimm flustered and demanding that he marry her as compensation.

According to her, after joining the unit, she stopped dying every single day.

As an arch-priest of Zenarith, Grimm borrows the strength of her goddess, acting as a proxy for her "miracles": 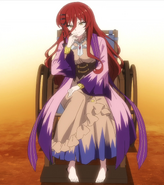 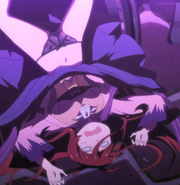 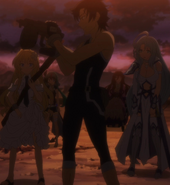 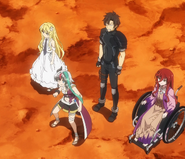 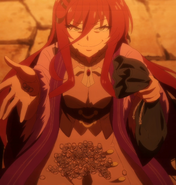 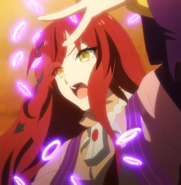 Retrieved from "https://sentouin-hakenshimasu.fandom.com/wiki/Grimm_Grimoire?oldid=1877"
Community content is available under CC-BY-SA unless otherwise noted.