Heine of the Flame

Kristen McGuire
Heine of the Flame (炎のハイネ, Honō no Haine?) is one of the Four Heavenly Kings in the Demon Army.

Heine is a beautiful dark skinned demon with a pair of horns sticking out of her head, she has white hair, red eyes and large breasts. She wears a skimpy red-trimmed outfit. She has an oddball aura.

Heine comes off as a proud and confident demon, because of her high ranking position in the Demon Army. She especially enjoys being addressed by her title, which makes her easily manipulated.

Although she is a demon, Heine has a kinder sympathetic side, feeling bad by both Grimm's and Gadalkand's brutal deaths that she witnessed, and breaking in tears in tense situations.

Heine confronts Combat Agent Six's commando unit after they attack the Demon Army's supply convoy. She becomes interested in Six due to his combat prowess, trying to convince him join the Demon Army twice when they met in the battle field.

During one of their many confrontation, Heine lost her magacite, losing most of her power. After she tried to attack the Royal Capital after the Hero's absence, Heine witnessed Gadalkand's death at the hands of Six, and she accepted the one month truce between Grace and Demon Kingdoms offer before running away.

After the surrender of the Demon Kingdom, Heine is forced to work in a new powerplant constructed inside the newly built Kisaragi base as a water heater.

As per the name of her title, Heine's power mainly focuses on Fire Magic. 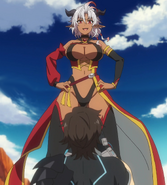 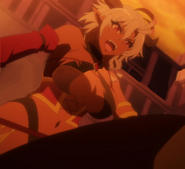 Retrieved from "https://sentouin-hakenshimasu.fandom.com/wiki/Heine?oldid=1789"
Community content is available under CC-BY-SA unless otherwise noted.