Lilith is a beautiful young woman with dark hair in a bowl cut and dressed in a white lab coat.

Although Lilith comes off as a confident and cocky scientist, she doesn't like to be belittled by her subordinates like Combat Agent Six. Especially when Six calls her insane for using him as a test subject for trying out the teleporter. Due to her nature she is very unpopular inside the organization.

She has a history of ridiculous ideas one time she had tried to turn the sahara desert green with Natto (japanese beans) this has made the native populace upset due to the act.

Lilith is the head scientist and also one of the founders of Kisaragi who built the teleporter that Six and Alice use to visit a new world to conquer.

Lilith was shortly put into custody after failing to retrieve Six after her trip. She tried to start a rebellion while in custody, but the attempt failed miserably since she wasn't very popular inside the organization. 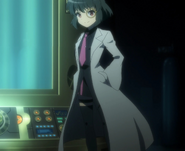 Retrieved from "https://sentouin-hakenshimasu.fandom.com/wiki/Lilith?oldid=1825"
Community content is available under CC-BY-SA unless otherwise noted.