Sayaka Kikuchi
Snow (スノウ, Sunō?) is one of the main characters of the Combatants Will be Dispatched! series.

Snow has long silver blue hair with an ahoge and light blue eyes. She wears a, very revealing white dress that exposes most of her cleavage, with metal armor, a black metal collar around her neck, and a metal necklace with a cross on it.

Because of her position as captain of the Grace Kingdom knights, Snow is an authoritarian figure. She's also known to be avaricious and desires to be called the best swordman in the land but She's also Greedy When it comes to Money,She holds 2 face Personality Sometimes She talk about her Pride and Dignity and on other hand She Lose Her Control for Greed when it comes to Money even to Forget her Pride.

She like Sword's alot She have Sword called Flaming Zapper She doesn't even leave it While Sleeping,She Sleep while Hugging Her Sword. 

Snow initially finds Combat Agent Six and Alice within the periphery of the Grace Kingdom. After hearing their fabricated story, Snow leads the two into the Grace Kingdom and introduces them to the Princess, Tirrus Grace. 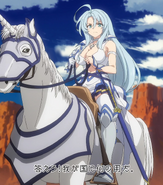 Add a photo to this gallery
Retrieved from "https://sentouin-hakenshimasu.fandom.com/wiki/Snow?oldid=1014"
Community content is available under CC-BY-SA unless otherwise noted.